When you look at the balance sheet of one company,it must have inventory, trade receivables and trade payable under the current assets and current liabilities columns respectively.

Inventory, as the name applies is the raw materials, semi-finished products or finished products that are ready for sale. One metric to evaluate it is through inventory turnover days which is defined as number of days the company takes to sell the inventory on hand. (Source:Investopedia) and its formula is as below,

Inventory Turnover Days = (365 x Average Inventory) / Cost of Good Sold
The higher the days, the longer the company takes to clear its inventory, but it still depends on the company's business nature as if the products is perish or their products are fast become obsolete, of course the company will keep the inventory low to avoid written off.
Trade Receivables, is the money the company will received within one year. One should be careful if the company has high trade receivables as this means that the company is slow at collecting money from their customers and lending money to them at an interest free rate. One metric to evaluate it is through receivable turnover days which measure a company's effectiveness in extending credit as well as collecting debts (Source:Investopedia) and its formula is as below,
Receivables Turnover days = (365 x Average trade receivables) / Revenue
The lower the days, of course is better for the company as it proved that their cash collection is efficient. Some companies have high receivable turnover days because they extend the credit limit to their customers in order to get the business orders especially those companies in a competitive industry.
Meanwhile trade payable is the opposite of trade receivables, which is the money the company owed to the vendors or suppliers and need to pay them within a year. It's also can be evaluated through payable turnover days too.
Payable Turnover days = (365 x Average trade payable) / Cost of Good Sold
Of course it will be good for the company to have high payable turnover days as the company can maximize their cash flow and spent the money else way to generate income for the company before paying the bills. In other terms, the vendors are actually lending money to the company without charging any interest after provide their services or products to the respective company.
And the last one is the summary of all three metrics above which is the cash conversion cycle. It measure the amount of time each net input dollar is tied up in the production and sales process before it's converted into cash through sales to customers. It also means to measure the time between outlay of cash and cash recovery. (Source:Investopedia)
Cash Conversion Cycle = Inventory turnover + Receivable turnover - Payable turnover
The shorter the cycle or days, the lesser the capital is tied up in the business process. It's best to compare the metric among the companies within the same industry like F&B companies probably have better cycle than construction companies as construction business orders are mainly contract based and in credit mode. 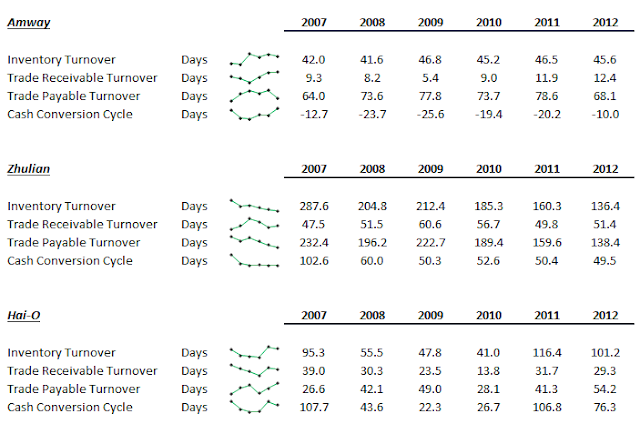 I made a rough comparison between Amway, Zhulian and Hai-o which are in MLM industry. Amway consistently keeps a low inventory level, thus it needs a lower number of days to clear their inventory compared to Zhulian and Hai-O.

Apart from that, Zhulian's gross margin is the highest among three due to its low cost of goods sold. Thus, you will see that its inventory turnover and trade payable turnover ratio is quite high.

Zhulian is the best when dealing with trade payable turnover, thus having some spare cash to spend before paying to their suppliers or vendors.

Hai-O is the worst among three which has inconsistent and high cash conversion cycle as the cash is tied up in their production or sales department.
Posted by Unknown at 5:19 PM