AWC Berhad: Getting more than ABC

AWC Berhad is not a well known company with market capital less than RM100 million.

I came to know him when the group made an announcement regarding its acquisition that will probably increase its top & bottom line. After watching how latitude, chin well, Ge-Shen and KESM performed after acquisition, I think I need to spend some time to understand it.

The group has 3 divisions,

Environmental division provides automated waste collection system called STREAM to transport municipal solid waste via pipes to a central waste handling facility. So that the waste collector does not need to go door-to-door to collect the waste. It's noted that the group owns only 51% of this division 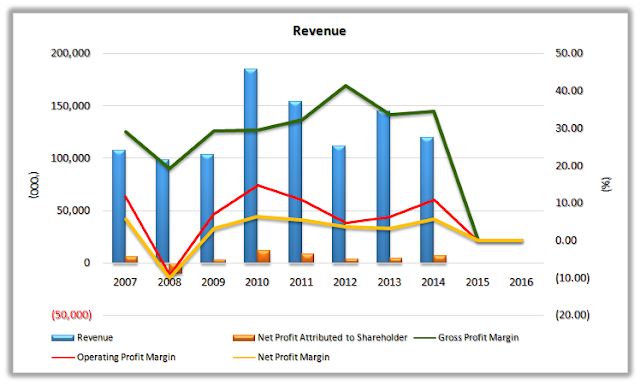 The group made a loss at FY2008 due to poor performance as well as one off provision and impairment.

That year, the group developed a Business Transformation Plan (BTP) to refocus on its core business, improve human capital management, develop the group's facility division into market leader and expand its STREAM business to Middle East.

Well, the management able to improve the group's performance from loss making, but not to the extend that called splendid or awesome.

The group's performance thereafter was quite volatile, maintained around RM100-200mil and RM4-10mil top line and bottom line respectively. Net profit margin was 3-6%.

The group once had a technology division (IQL group) before but it made RM3mil and RM7.3mil losses in FY2011, FY2012 respectively. Soon, the group decide to divest this division in June 2012. 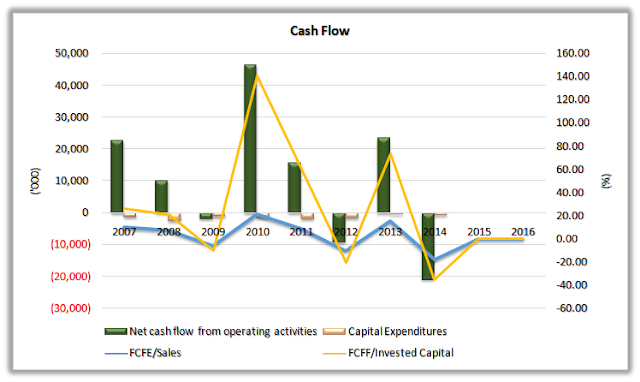 In terms of balance sheet, the group was in net cash all this while with minimal borrowings.

This can be explained by the group need very less amount of capex every years. 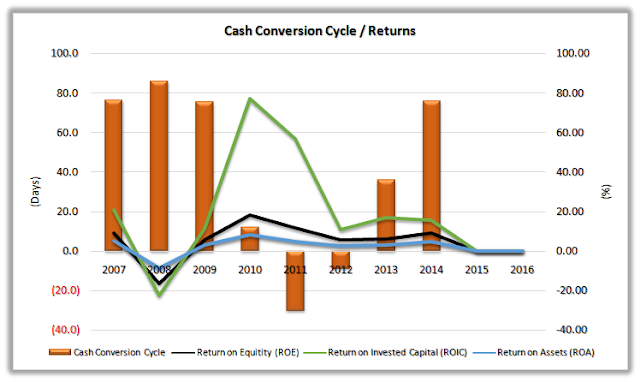 The group's cash conversion cycle was below 90 days all this while which is considered okay to me.

In terms of ROE, the group managed to record only single digit number for the past few years.

Its engineering division did not fare quite well all this while, its profit margin was quite low and contributed very minimal to the group's bottom line

The group was focusing more on its 2 other divisions, namely facilities and environment.

Facilities division provides stability to the group. 75% of the Facilities's revenue derived from the concession with the government to provide asset management service while the rest came from the private sector. But the management need to manage its operating costs very well and it's noted that the electricity costs account for more than 40% of the Concession's cost of sales.

Throughout the past few years, the group managed to clinch some contracts in UAE through the job venture with Model Building UAE and Dallah Establish to design and supply automated waste system. However there was a second project in Al Reem Island worth RM150 million was delayed until today as the development there was stop.

Apart from that, STREAM is well-accepted at our neighbor country, Singapore too.  The group was also awarded operations and maintenance contracts for the STREAM systems such as in Terminal 3 Changi and Resort World Sentosa after completion which provide recurring income to the group.

With lesser amount of development in near future, it's expected the award of STREAM system to the group will slow down. But nevertheless, the system is quite good in terms of convenience, cleanliness and cost saving. It's just matter of time the developers will start utilize such system in their development especially at place where space is limited.

Based on some online articles, the division had around RM60 millions order book at the end of Dec 2014.

So, that's the basic study on the group