It’s noted that Luxchem Corp. has 2 segment divisions, namely trading and manufacturing. With the recent drop in crude oil price, it prompt me to look at some sectors that will benefit from the decline in oil price.

Obviously, Luxchem is one of them.

Luxchem does not manufacture nitrile, it sources the chemical from Zeon Chemicals of Japan and supplies nitrile to glove producers. I do not have any info of any local competitors who supply the same chemical to the industry and also which glove producers are their customers. However, Kossan for sure is one of them due to their close relationship.

I tried to find some linkage between crude oil price, USD/MYR rate and Luxchem’s sales for the past few years. Below are historical price chart and Luxchem data. 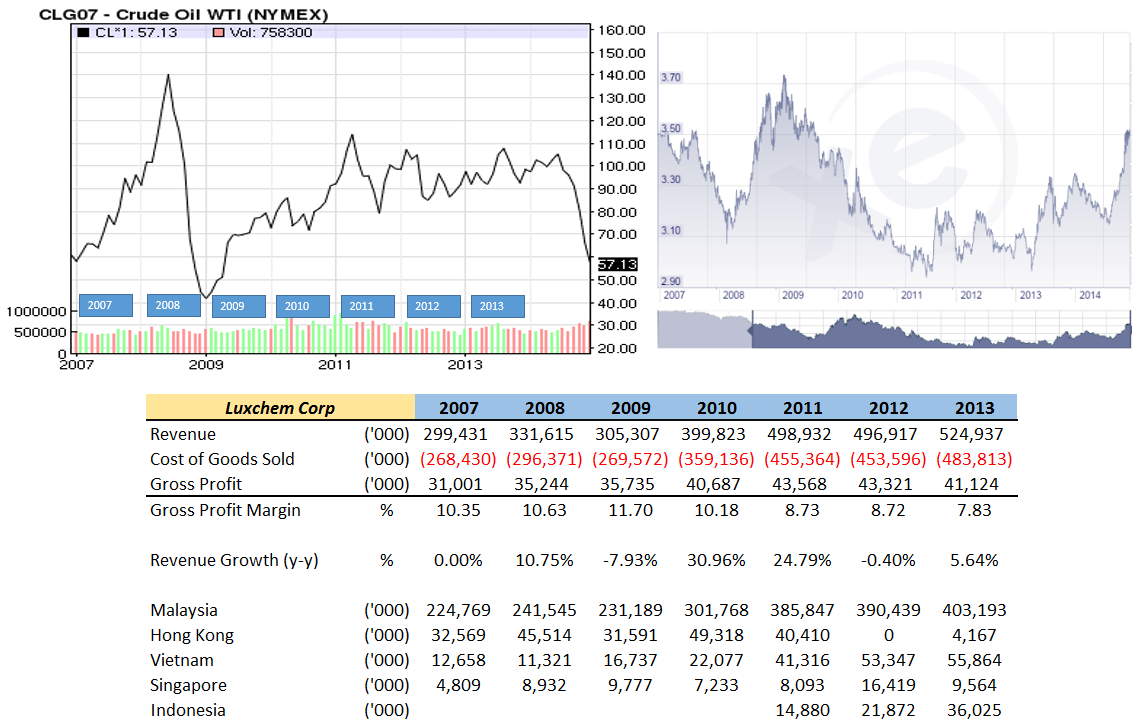 Financial year of Luxchem is at the end of December.

Year 2010: Crude oil price was quite stablished, hovering between USD70 to USD90. USD dropped from 3.3 to 3.05. Revenue up 31% with sales from local increased tremendously.

Year 2011: Crude oil price was little bit fluctuating, gone up to USD115 from USD95 in the beginning of year, then dropped back to USD80 before end the year at around USD100. USD stabilising around 3.0. Revenue up around 25% with sales mainly from local.

When breakdown into segments, the operating profit margin of the trading segment was declining.

Perhaps the group cannot pass over the cost to the customers

Perhaps the group locked down or signed mid term contract with the suppliers/customers for a certain fix price.

I have really no idea about that.

For the manufacturing department, raw materials such as petroleum based styrene monomer and glycol are used to manufacture unsaturated polyester resins (UPR) and they are subjected to oil price.

Above operating profit data were taken on external sales which eliminate the inter segment sales.

For year 2011-2013, the gradual increase in USD currency rate and crude oil price cause the operating profit margin dropped to around averagely 10%.

Moving forward, the crude oil price may not have much significant effect on the trading department, albeit I foresee their operating profit margin will keep on declining.

Perhaps, will we see the return of 15-20% operating profit margin from the manufacturing segment next few quarters?

The increase production capacity in year 2014 may help too.

So, perhaps Luxchem, a good buy?

Email ThisBlogThis!Share to TwitterShare to FacebookShare to Pinterest
Labels: Luxchem