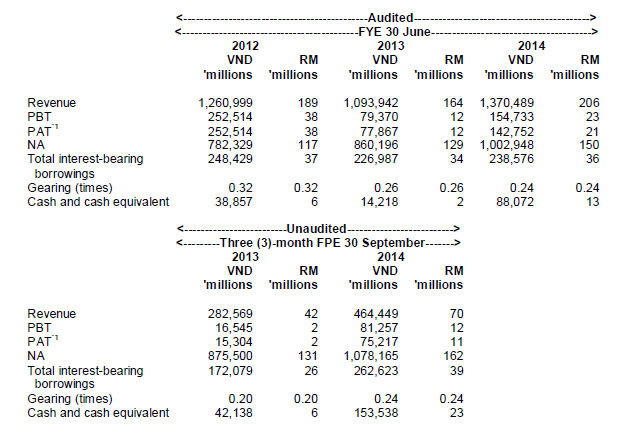 Along with the announcement, it also published the past years result from the Vietnam plant. Its contribution to the Chin Well group is quite significant.

However, its result for the past 3 years was quite bumpy. Gearing also in the region of 0.2-0.35 with low level of cash balance.

For Q1FY15, it marked a great improved performance with PAT 5 times higher than same quarter preceding year. Cash balance also increased as well as the borrowings.

No wonder the group made the decision to acquire the remaining shares it doesn't own.

Well, it's still a cyclic business. Have to keep monitoring as the products from Vietnam plant mainly exported to Germany, UK and US.

I made a stimulation on the result by assuming Chin Well group owned 100% on Chin Well Vietnam plant for trailing 12-month period. I directly just used the net profit of the group since its bottom line does not need to attribute to minority interest anymore.

No. of outstanding shares increased 10% as part of the conditions of the acquisition

As a result, net profit chalked up to around RM50.9 mils which give it a EPS of 17cents.

Net profit margin increased to around 10%.

Nothing change on its revenue, gross profit and operating profit.

The total consideration of RM92mils is funded by RM39.15mils (New shares issued), RM8.3mils internal fund and the rest from borrowings (advanced by Asia Angel). The balance shall be satisfied within 2.5 years after the acquisition.

Thus, I adjusted the amount by reduce its cash as well as increase its borrowings. Net borrowings further reduced to RM67mils with net gearing ratio increase to around 15%.

ROE increase to 11.3% due to increase in bottom line while ROIC reduced to around 10% as a result of higher borrowings.

In terms of valuation, both market capitalization and enterprise value also increased due to larger number of shares and higher borrowings respectively.

Earning Yield dropped slightly to 12% due to increase in borrowing and no change to its operating profit.

I always view this acquisition as a positive move although the acquisition took place in the PE region of 10.

Hopefully the performance of the Vietnam plant will keep on improving and contributed more to the group.

Besides, the consolidation of the Vietnam plant into the group also helps the group in better management position to manage its cash flow and operation.