Its manufacturing division comprises of two business units namely packaging and polymer. Scientex is one of the world’s largest producers of stretch film, with an annual production capacity in excess of 10 billion metres. The group has currently 9 production lines for its stretch film product and has started works on adding 2 new lines which commence operation in 2013.  At the beginning of this year, Scientex group had acquired GW Plastics Holding Berhad which made Scientex one step close to become world's top producers of industrial plastic packaging player.

Its property development division is made up of its flagship development in Pasir Gudang and Kulai in Johor which strategically located at the prime land within the Iskandar Malaysia growth corridor in Johor. Apart from that, its Skudai projects, through its strategic location in the Nusajaya vicinity and close proximity to the Second Link has attracted Singaporeans to invest there too. Elsewhere, Scientex group has another property development in Ayer Keroh, Melacca. Scientex group has both affordable housing segment as well as high end development to suit different type of income groups.

Let's see how the group performed for the past 5 years based on the annual report 2012 .. 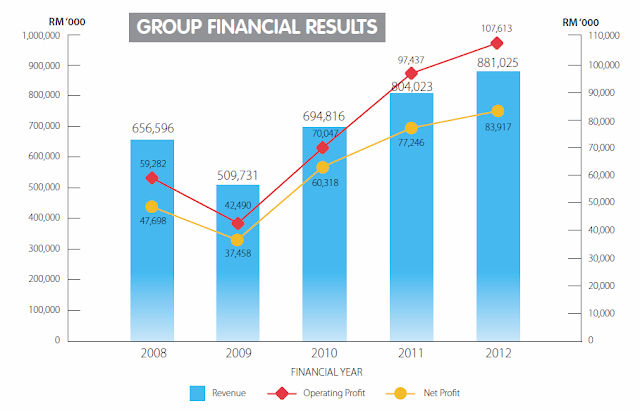 Except at year 2009, the group had performed remarkably well and rebounded from the economic slow down. Revenue, operating profit and net profit improved every years from year 2010 onwards. Profit margin in the region of 9% for the past few years.

Shareholders' equity had improved years by years while its ROE was in the region of 15 for the past 5 years except at year 2009 due to lower earnings at that respective year. The group had kept a low borrowings throughout the years. Net gearing ratio is low, but this excluded the recent acquisition of GW Plastics Holdings via internal fund and borrowings that took place recently at Jan 2013.

For 1HFY13, revenue grew 19.7% compared to the first half of last year while its net profit grew 21.6% as the same period of time. The increase in revenue was due to the improved performance from its two core businesses. In addition, the recent acquisition of GW Plastics in Jan 2013 had contributed one-month revenue to Scientex Berhad. EPS improved to 23.48sens from 18.98sen last year.

Foresee second half will see even better result due to the contribution from its latest acquisition. GW Plastic Holdings's revenue and net profit in year 2012 was RM370millions and RM25m respectively. If all the revenues are contributed to Scientex Berhad, the group's revenue can reach above RM1 billion. RM25m net profit of GW Plastics is translated into additional around 11.7sens EPS for Scientex Berhad. Thus, Scientex berhad's EPS for year 2013 should able to reach above 50sens barring any unforeseen circumstances. Dividend per share may be around 15sens based on EPS of 50sens and 30% dividend policy for year 2013.

Photo above retrieved from the group's latest quarter report which shows the segments' revenue of its 2 core businesses. It's noted that the manufacturing segment contributed around 70% of the group's revenue but only contributed to a mere 33% of its operating profit. The margin of its manufacturing segment is around 6% which is on par with GW Plastic, Luxchem and Texchem. The margin is little bit tight in the chemical packaging industry. Fortunately, the group's property segment help to generate a good operating profit with a margin of 30%. Overall, operating margin is around 12% excluded tax.

In terms of balance sheet, reserves are almost 4 times the share capital. However, the fact that Scientex Berhad acquired GW Plastic Holdings through internal funds and borrowings at Jan caused Scientex group took up a large amount of borrowings for this acquisition. The Group's borrowings is RM322 millions at which RM126millions is short term borrowings. This caused the gearing ratio increased to 0.5 from 0.04 before. The group's cash is only RM50 millions. Current ratio dropped to 1.17 from 1.39 due to the increased short term loan.

Now left the question on how the management team going to repay the borrowings especially the RM126 short term loans to keep the gearing ratio at a comfortable level. Perhaps a right issue combined with bonus issue and warrant may be the fastest way to repay the borrowings. Or only repay slowly throughout the followings years given the Group's reserves is still strong.

I sent an email to Scientex Berhad to enquire about this today and hope they will reply me before I make my decision to invest in Scientex Berhad as Warren Buffet once said that it's not comfortable to invest in a company that takes up a large amount of loans as the liquidity may cause an issue during economic downturn.
Posted by Unknown at 11:45 AM

Email ThisBlogThis!Share to TwitterShare to FacebookShare to Pinterest
Labels: Scientex