After glancing through the quarter report, I think the result was quite moderate and a bit below my expectation. 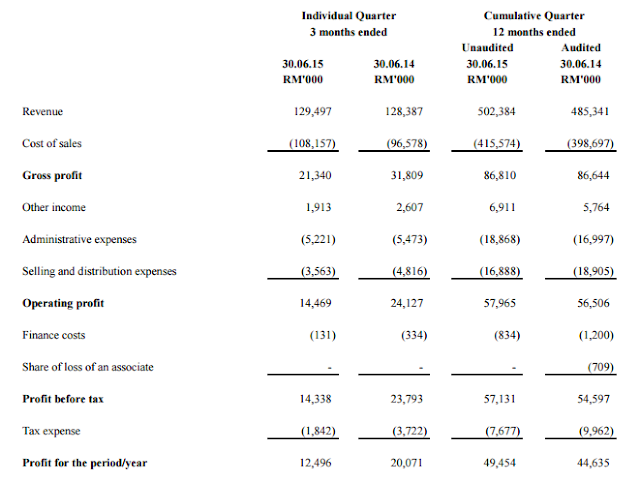 Even coupled with lower administrative expenses and marketing expenses, the group posted much lower net profit in the end.

Since the acquisition was completed at previous quarter, the group does not need to share the result to the minority parties anymore.

Assumed the group taking full control since the beginning of the financial year, full year EPS would be RM49.4 million net profit divided by around 300 million shares, which equivalent to 16.46 cents. PE is around 8.5.

In terms of balance sheet, one thing to highlight is the group able to reduce its net debt position from RM25 million to net cash of RM2.1 million even taking into account of RM8.3 million to pay for the acquisition. That's a very healthy sign.

This was contributed by its strong cash flow and positive high free cash flow. Minor set back was the group made an inventories write-off of about RM4.5 million.

Fasteners segment posted poorer result this quarter. Management explained that it was due to demand slow down in European countries as well as product mix that generated lower profit margin products.

Surprisingly, the Wire segment posted a loss in this quarter. I expected it to post a good result due to new product of panel fence being launched. But things went to the other way as revenue dropped.

Management also did not mention anything regarding the DIY products that the group emphasize all this while as DIY products fetch higher margin.

In summary, it still depends on its growth prospect in the Fasteners segment and its stability in the Wire segment.

At a PE region of 8-10 may not provides much growth in the share price as current sell down in the market caused many companies selling at cheaper price and higher dividend yield.