Matrix Concept just released its third quarter report today and it turned out to be just another nice result for the group.

For the third quarter, the group recorded a turnover of RM127m and net profit of RM36m with a net profit margin of 28.41%. 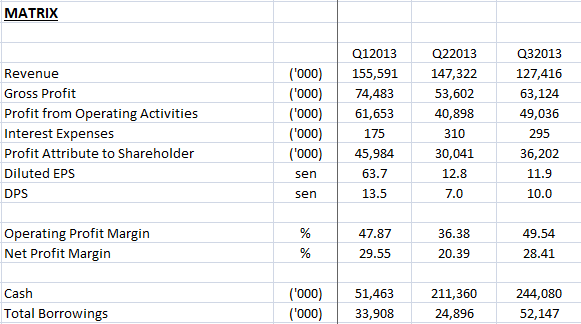 For the 9 months period, group earning per share is around 37.3 cents based on the no of shares of 300.7m. Let's assume a full year EPS for year 2013 be around 50 cents, current PE is around 6.48 based on today closing price of RM3.24. There is still room to advance for its share price if compared with Tambun and Huayang.

In terms of balance sheet, there is nothing much to highlight as the group has net cash and good current ratio. Based on the net asset per share of RM1.80, estimated ROE for year 2013 will be around 27 which is quite good. Hopefully the management team able to continue producing a good return to the shareholders.

In addition to the announcement, there are still a couple of corporate proposals are undergoing by the groups.
If all this acquisitions are funding internally, the group is still in net cash position.

In addition to the quarter result announcement, the group also declared third interim dividend of 5 cents along with Speeeeecial dividend of 5 cents too. This sum up a total of 30.5 cents dividend declared for this year excluded tax ( 13.5 + 7 + 5 + 5 cents dividend). Based on my purchase price, the dividend yield is 11.8%. And what's more, the management team mentioned they will continue to maintain quarterly dividend payout as part of its 40% dividend policy. So, expect another dividend payout at 4th quarter.

For this case, Matrix Concept is really dividend king, really is 财神爷