After studied Chin Well Berhad, of course the next will be the player in the same industry, Tong Heer Resources Berhad. 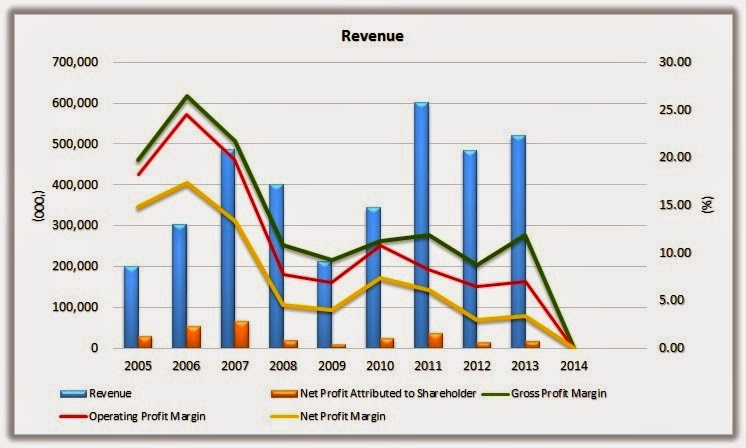 Same as Chin Well group, performance of Tong Heer Resources group had been in roller coaster ride too with fluctuating profit margins and still not yet recover the profit recorded before 2008 financial crisis.

The operating and net profit margin are lower than 10% for the past three years.
Drops in performance of the group in FY2012 was due to low demand and EU investigation of anti-circumvention during the year.

In 2009, the group tried to diversify into other business segment by subscribed 37.04% equity interest in Fuco International Ltd at USD20mils, which involved in steel billet manufacturing in Vietnam. However up until FY2013, the group's associates, Fuco Steel in Vietnam is still in red. 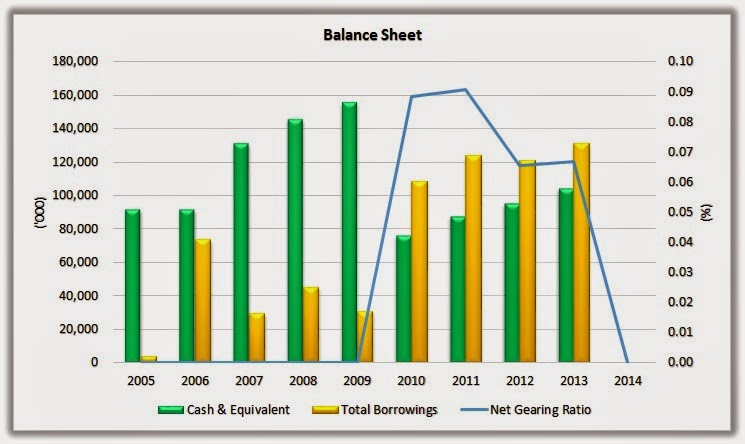 The group is not in net cash position with net gearing ratio of 0.07 which is manageable. Majority of the borrowings are denominated in USD dollar with effective rate range from 0.73% to 3.8%.

In Aug 2010, the group also diversified into other metal business by acquired 51% equity interest in Metech Aluminium Industries (changed name to Tong Heer Aluminium) for RM35mils, which involved in aluminum extrusion in Penang and Tong Heer (Thai) also acquired a land situated in Pinthong Industrial Estate for business expansion.

All these corporate actions caused the group took up some loan to finance the expenditures. 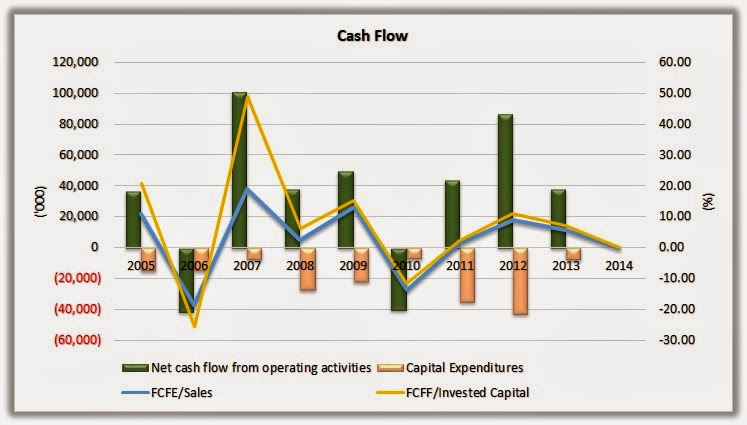 The group’s cash flow was quite bumpy but the management able to control its capex spent nicely. Other than FY2006 & 2010, the group managed to record positive free cash flow throughout the years.

Bear in mind that I didn’t not include acquisition on new subsidiary or associates into capex calculation. 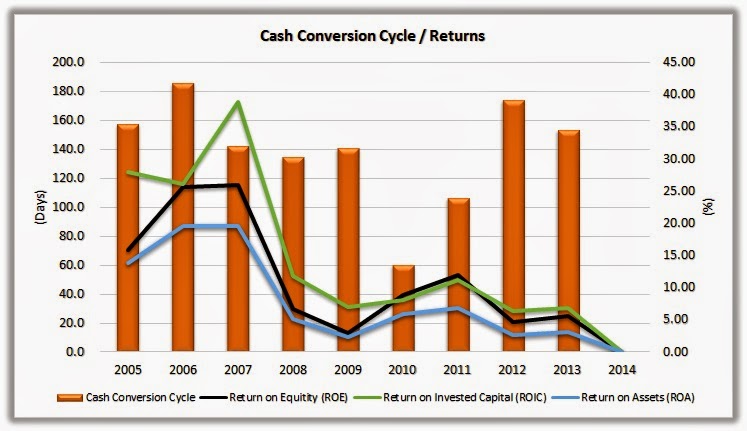 It’s same as Chin Well group as the group maintained a high inventory turnover that caused high cash conversion cycle but its trade receivables turnover is better in comparison.

ROE and ROIC are so bad that recorded well below 10% which in theory, it's destroying shareholder's value. Low profit margin, low net profit and high capital required contributed to this scenario unless the performance improved and get back to the old days before FY2008.

The group only started to report segment breakdown after it diversified into aluminium extrusion business. Fasteners segment is still the core business of the group, contributed more to the group’s revenue and profit. Both segments also record PBIT profit margin below 10% but Aluminium extrusion segment showed slightly better. Margin for fasteners is quite bumpy too.

Unlike Chin Well group who’s close to 60% of its sales come from European countries, Tong Heer Resources’s sales are quite equally diversified into different countries which is a good point. 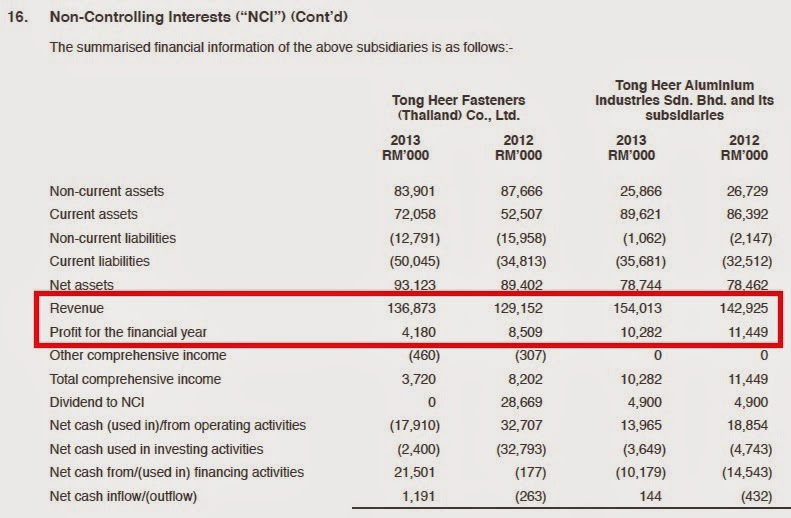 Increase revenue but with lower net profit recorded for both subsidiaries compared to previous year. This is not encouraging especially the Thailand plant with lower profit margin and negative operating cash flow. 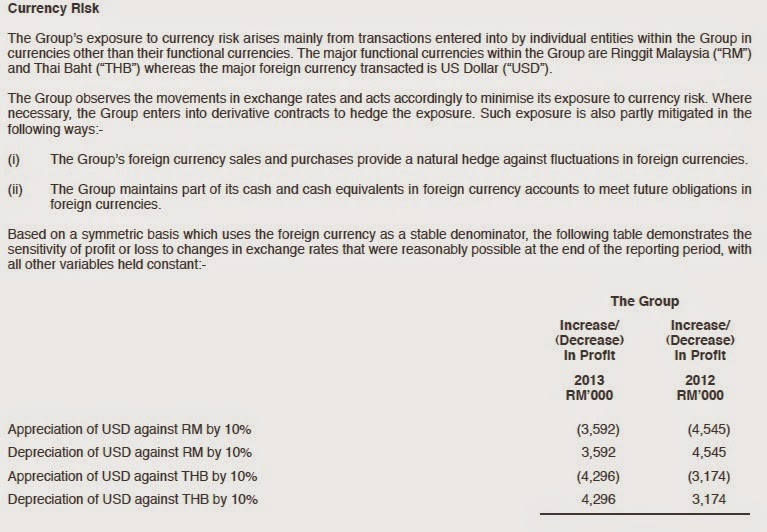 Another thing investors who wish to invest in Tong Heer group need to take a look at its currency risk profile. The group is quite exposed to USD currency based on the currency risk explanation as stated in the latest annual report.

The group is quite sensitive to USD currency. The weakening of both functional currency of Ringgit Malaysia and Thai Baht against USD will have immerse impact on the group's performance.

Do take note of this

And dividend too~ 6 cents interim compared to last full year of 5 cents. Any more to come?

Seems like it's going to be a good year for the fastener industry.

Mr Tsai Yi Ting (Aged 24), Managing Director is the son of Mr Tsai Ming Ti who is the Chairman of the group currently.

He was appointed as Assistant to Managing Director in Jan 2010 at the aged of 20 ( Hmmm, I just entered my first year of uni life at that age ).

He was appointed as Managing Director on Aug 2012. at the aged of 22. ( Well, I still not yet graduated and still playing dota at that age ).

Well, since the founder is still working in the company and has at least 10 years more to guide the Junior Tsai. It should be no problem for handover.
Posted by Unknown at 11:06 AM