Here comes with the peak period of time where listed companies release their financial reports, so does Protasco Berhad. The group just released its final quarter for financial year 2013 this evening.

For full year 2013, revenue and net profit increased 22.45% and 29.8% respectively compared to last year. This was due to increase in profits from all over the segments as shown in the table later. Full year ROE is 12.30, still lower than my benchmark of 15 while full year EPS is 15.79 cents which translated into PE of around 10 based on today price of RM1.55. 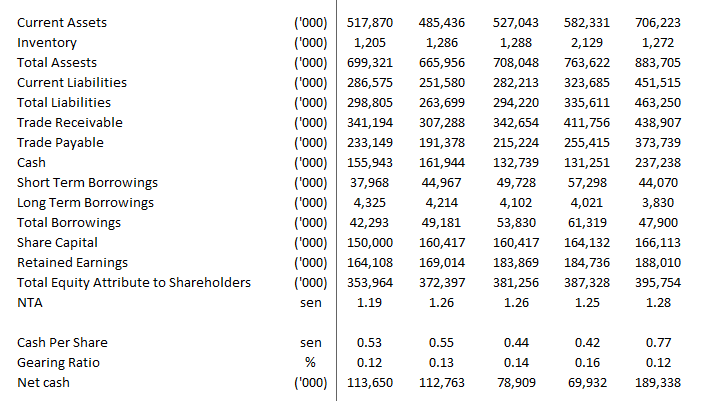 In terms of balance sheet, few things to note here. Trade receivables and payables increased 28.6% and 60.3% compared to last year. Protasco's trade receivable turnover and payable turnover always not that good all this while, both ratios are around 140 days for year 2013. Current ratio dropped to 1.56. Good thing is the cash balance increased to RM237 mils from RM155 mils earlier with around RM48 mils borrowings.

From the cash flow statements, it can be seen that majority of the cash increases came from the operating cash flow as a result of big jump in increase in payables, perhaps the group is trying to delay the payment to the suppliers. Additional cash will be generated from the private placement that still in progress. Foresee the final dividend for year 2013 that yet to be announced will reduce the cash balance a bit.

The profit before tax for its core business, maintenance & construction segment actually recorded a drop. The management commented that this was due to revised rates for periodic road maintenance were received at the end of 2012 which gave a better margin. Engineering service, trading and education segments were showing improvement from loss last year especially the trading department who supports the maintenance, construction and property development will improved further along with those segments. Lastly, the property segment started to contribute higher profits to the group compared to last year but hopefully more to come next year.

For full year 2013, no doubt road maintenance is still the core business for Protasco group. Hopefully, the engineering segment will keep on improving its result as the segment recovered from loss last year. Next growth will be the property development segment at which the group mentioned the progress of the De Centrum project was just at 20% as at Dec 2013. For 2014, the group will depends on the usual maintenance segment and counts on the construction and property segments as there were few major projects were secured for construction and higher contribution from the De Centrum project. Another thing to note is the profit margin from the construction segment is just far too low, managed to earn a mere RM2.6 mils profit before tax from RM171 mils revenue. That's just 1.51% margin.

For long term, the venture into oil & gas industry will give additional incomes to the group. But, it's still too early to judge this as there are few doubts about the acquisitions.

Right now, just hold on and enjoy the free warrants and ride on the profits.
Posted by Unknown at 10:35 PM

Email ThisBlogThis!Share to TwitterShare to FacebookShare to Pinterest
Labels: Protasco