Laminated papers segment is considered part of the cigarette packaging's side business. This segment produces environmental safe composite transfer paper and aluminium foil used for package of cigarette, food and wine boxes. Operating profit margin has been consistently above 20%, but revenue contribution to the group is not significant.

Book printing services segment is the previous core business of the group, but the place was taken by the cigarette packaging division after the consolidation. This segment was not good all this while. Revenue and Operating profit margin getting lower and lower due to stiff competition from the foreign companies. I guess that is the reason why the group disposed its book printing business in Dec 2014 for HKD109 million and focus on its core business.

The revenue and operating profit margin for the cigarette packaging has been improving after consolidated into the group. The growth rate of its revenue is good and almost hit double in 3-year time as a result of acquisition and organic growth 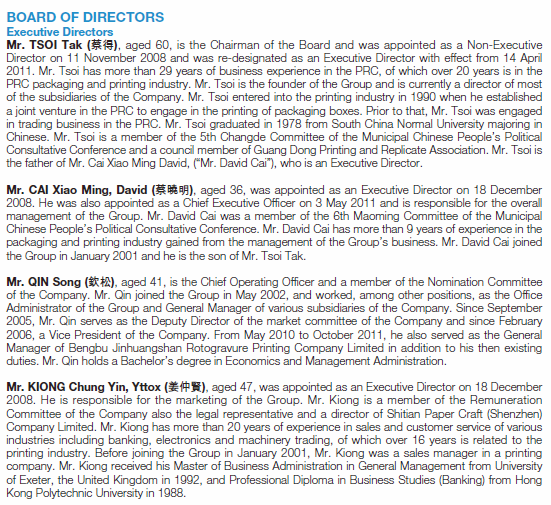 The key men of the group are them, especially Mr Tsoi Tak who is the founder and chairman of the group while Mr David Cai is his son and probably the man who will continue to drive growth for the group in future. Mr Qin and Mr Kiong is the COO and Executive director of the group, taking care of the operation and marketing of the group respectively.

Mr Tsoi Tak took a hopping total HKD24 million of emoluments at which half of it was incentive performance bonus in FY2013. 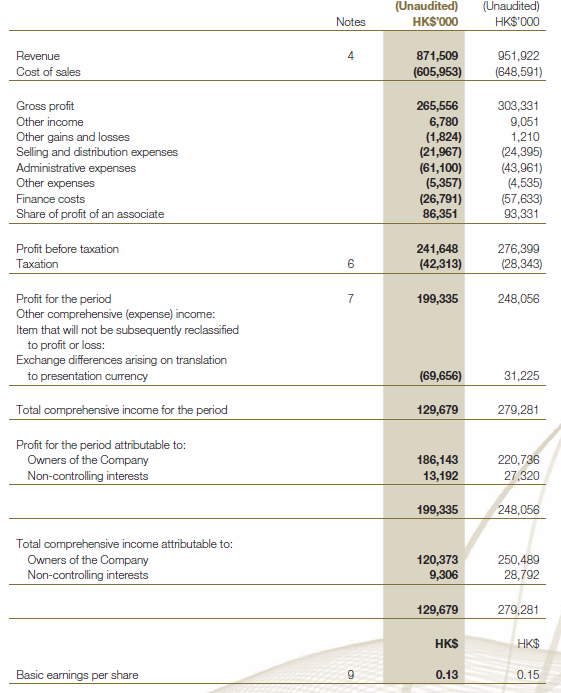 For the first half FY2014, the performance of the group dropped as a result of slowed orders from the high tier market as they stockpiled around the end of 2013. To make it worst, administrative expenses increased tremendously due to increase in director remuneration, staff welfare and entertainment expenses. So, the management team and employees were taking higher pay when the company's performance was dropping :(

As noted in the announcement, the group has strategically expanded its post press services which in selected brands can offer higher profitability and lower working capital commitment. 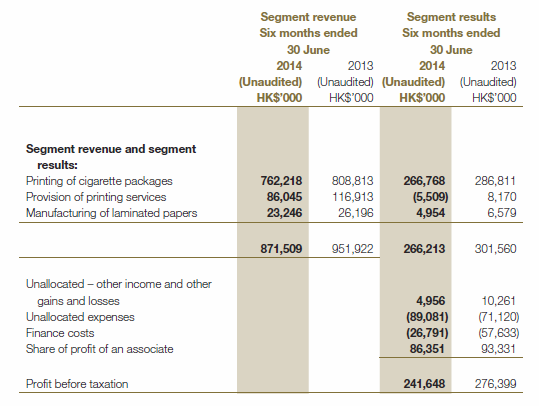 When looking at the segment reporting, it's obvious that the other cause for the performance drop was due to the loss making of the book printing business segment although it's not that significant in terms of profit contribution. The group made a decision to dispose this division last December.

Apart from that, it's noted that the operating profit margin of the cigarette packaging also dropped to 35%. It's similar case for the laminated papers division.

The group made a couple of corporate announcement in this few months.

First, the group acquired the 40% it does not owned in Giant Sino in Nov 2014 for HKD82.4 millions. Thus moving forward, the profit will be fully consolidated into the group's bottom line.

In Jan 2015, Masterwork Machinery (Manufacturers of printing equipment) has entered into framework agreements to acquire 251 millions shares of the group which represent around 16.9%. I think there will be certain synergy effect between the equipment manufacturer and the group as it may provide equipment with better and higher technology to the group in future.

In a separate case in Jan 2015, a third party group also tend to acquire 103 millions shares of the group which represent 6.95%. Not sure about this as the info is quite limited.

Both AMVIG and Brilliant Circle also having a hard time this year and both also will release their full year result soon.