Chin Well Holdings just announced its result for Q2FY2015. Some of the key highlights are below 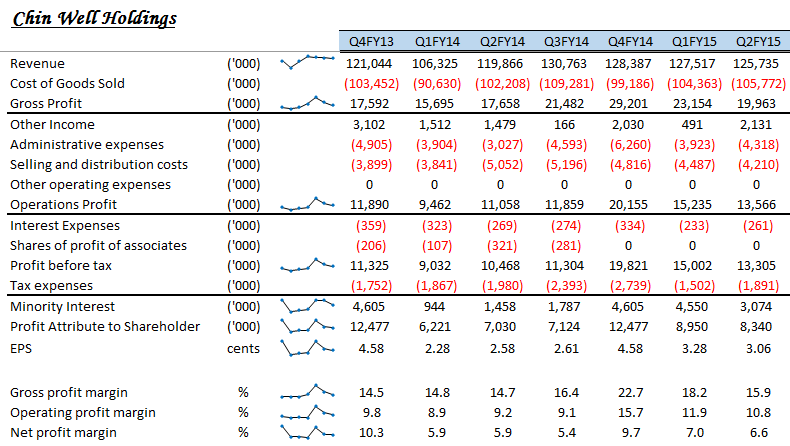 - Profit attributed to minority interest increased for the past 3 quarters. It will be interesting when the profit from its Vietnam plant being fully consolidated into the group's bottom line starting from next quarter onwards.

- Balance sheet remained stable. Expect there will be cash outflow and increase in borrowings next quarter as the result of acquisition. But the cash flow generability had been quite good these 2 quarters.

In terms of segment, the revenue for the fasteners division was pretty stable for the past few quarters. It's just the products that being manufactured or sold that affected its margin.

It's noted for this quarter, a products mix with lower production yield in the Vietnam plant lower down its margin and subsequently lower profit was recorded.

A new product, namely panel fence helped to improve the overall performance for its Wire division although the contribution to the group is not that significant.

By looking at the contribution from its Vietnam plant, the profit after tax from this subsidiary increased tremendously for the past 3 quarters. However, there was a drop in this quarter. Not sure it was due to the lower production yield or higher wage incurred. Have to take note of this as Vietnam plant remained a good growth engine for the group.