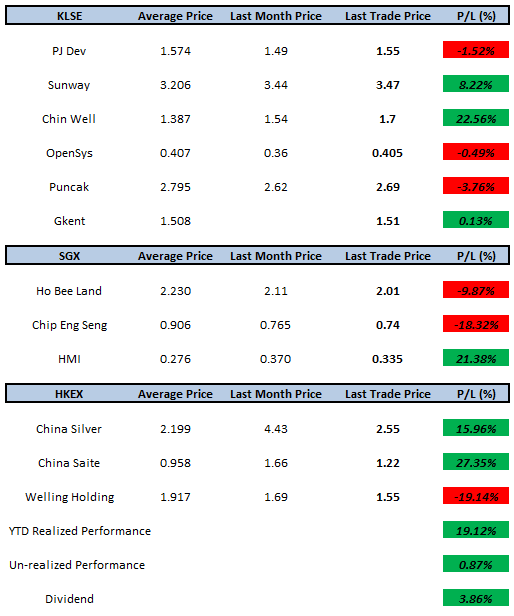 July was a poor month for me. Un-realized gains had dropped to almost zero. Have to get myself ready to face any negative performance soon.

This month's poor performance was dragged down by HK and SG stocks especially the 3 HK stocks that saw more than 10% drops m-o-m.

China Silver was the most hit and it just issued a profit warning after last Friday closed. I probably will sell off the remaining shares as the management expected that the group will announced no less than 90% drop in net profit for the first half 2015. That was a shocking news to me. Never expect that.

China Saite too having a roller coaster ride last month, dropping more than 50% from its recent high and now forming a base around HK1.2+. Let's see what is the result they are going to release in few weeks' time.

CES's price continued to drop last month. It's same for HB land. Probably need to hold both property/construction counters for a while.

Add in Gkent in my portfolio few days ago. I have been following George Kent all this while and made a few bids before this but all did not fall into my bidding price. So, I just watched the price went up and up. In the end, I was too emotional and bought it right away. Just a bet that they are able to get the contract on the LRT 3 project. And if the current Ampang LRT extension project is on schedule, its engineering division will post better result moving forward.

August is another month that most companies will release their quarter reports.

Have to get up and keep moving forward. I also signed up OTB's course and hopefully able to learn some technical skills to brush up my buying and selling technique.

Email ThisBlogThis!Share to TwitterShare to FacebookShare to Pinterest
Labels: Portfolio